Cities within Liberal Democracies: Planning for the Unknown

Cities can have strong leadership while still leaving space for the unplanned and unexpected. They can develop and follow a clear vision in the long run but still have room for spontaneous collaboration and innovation. During our visit to the former eastern city of Leipzig, we observed how a city government can steer clear of micro-management and ‘set the scene’ for spaces of freedom.

While contemporary theories of democracy promote social solutions that focus on consensus building towards the common good, discourses on futurology emphasize the relevance of the unknown: Uncertainty and openness are considered crucial to constantly provide opportunities for transformation. In this line of reasoning, it is not uncertainty that threatens liberal democracies in the complex world, but the loss of uncertainty. Translating this to the context of city planning gives rise to the following question: How can cities plan for the unknown? Following our visit to Leipzig, we would argue that these spaces – the gaps, the unexpected, the temporary use – should be formally considered in urban governance to strengthen local democracy.

The city of Leipzig shows elements of how space for the unplanned can lead to successful city development. Leipzig is a city with a tradition of strong mayors on the one side and an active citizen network with bottom-up confidence on the other. It is shaped by an industrial past, which is manifested in its open spaces for development. Furthermore, it is a city with a tradition of trade fairs that promotes an openness to visitors as evidenced by the large railway station. Similar to Austin, Texas, Leipzig is surrounded by a rural area that is politically less progressive. It could be said that the citizens of Leipzig strive to manifest a political vision different from the far-right movements occurring in the region. As a group we’ve experienced cultural life and civic participation in open spaces at many corners of Leipzig. However, the city government of Leipzig is also hoping to position itself as a global city with a strong business sector. The successful location of corporations at the outskirts of the city shows that much was done to be an entrepreneurial leader. And yet, there still seems to be space left for the unplanned and unexpected, which for us is where the most interesting interactions are occurring and where there are lessons to be learned.

Leipzig proved to be a robust city regarding its ideas and visions for the future. Despite massive political shifts in history and its socio-economic consequences, Leipzig did not decide on the common strategy for redevelopment: asking for foreign investments or federal subsidies. Instead, the city’s decision-making and visioning capacity built on its tradition of being a fair city, a city of labor movement, a city of civic movement. By trusting in its own capacity to turn socialism and its historical industry into a service economy – while staying cool in times of decline and maintaining ownership over housing and historic structures – Leipzig managed to leave many doors open for future development.

While Leipzig experienced a heavy decline in its population during the 1990s, the city managed to turn this trajectory around and see population numbers rise again. To build on this positive development, the city continues to develop an integrated urban development plan, the Leipzig 2030 strategy. What we found particularly interesting was how the city designed the strategy emphasizing processes for citizen involvement and the flexibility to allow for re-adjustment in the face of pressing challenges, such as climate change. Today, the city functions as a nation-wide lighthouse again – as, for example, our group experienced in a discussion with the Leipzig Unteilbar movement. Both protagonists found their way to Leipzig from former Western Germany and decided to stay after finishing university to support and strengthen civil society. This shows that Leipzig is a city where both internal city leadership and an external civil society maintain self-confidence. Both spheres manage to form productive relationships with both tension and long-term trust. The city also has strong ties with Leipzig University – located directly on the center square and serving as a knowledge hub and connector to different actors, such as business leaders. Leipzig has been successful in attracting large corporations, while also fostering local startups and new ideas through the innovation lab at SpinLab. Meanwhile, Leipzig’s community of artists, that give the city its unique identity and feel, are transforming blank walls, empty spaces, and parkland into destinations. All of these actors negotiate and shape the spaces of the city that make Leipzig what it is today. It is to the benefit of the city government to allow each of these actors room in the city to make their place.

One particular moment in Leipzig seems an appropriate metaphor to describe our overall “learning experience”. It took place while we were cycling through the western part of the city; through the former industrial landscape near the railway lines. A long stretch of land has been redeveloped by various citizen initiatives, for various uses, including a children’s adventure playground, focused on independent play, and encouraging children to paint, craft, and build themselves. There we saw a young boy, around 7 years old, casually holding an axe. The reactions of the American fellows in particular, of shock-horror that a child could be left to handle dangerous equipment, left a lasting impression and catalyzed conversations on the role of rules, regulations, and responsibility. In observing this one moment, many of us asked ourselves: given the appropriate formal and legal framework, can we leave spaces open for creative and spontaneous actions? Does this describe the approach that Leipzig has taken more generally, or one which the city aspires to in relation to citizen participation? While this raised safety concerns for some, the playground represented something special that was happening in Leipzig. The city’s history and political decision-making has left space for the future. What is so special is that there is still room for people to experiment and shape Leipzig based on their own vision.

Could this be a blueprint for progressive city development in general? Should fostering openness be added as a crucial element to other progressive ideas in urban development such as freedom, equality, and solidarity? The example of Leipzig shows different mechanisms of how to deal with uncertainty in urban planning processes, such as involving citizens in project development or temporary use. It also demonstrates that there might even be the need for new formal schemes to foster and incorporate the unplanned into urban planning. In doing so, the promise of liberal democracies that the future is open and it’s on everyone to take part to shape it, could be reflected by urban governance schemes that plan for the unknown. 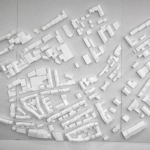