In October 2021, the New Urban Progress fellows went on a delegation trip through three German cities. Here, four of our fellows look back at some of the stops in the booming east German city of Leipzig that impressed them most.

There couldn’t have been an art exhibition more relevant to our delegation trip than the “Future of cities” exhibition that we visited in Halle 14, an art center in the area of the Leipzig “Baumwollspinnerei”, or cotton mill. The former industrial site is now home to galleries, studios, start-ups and restaurants.

Leipzig being a center for art doesn’t come from nothing. In a conversation at city hall we were surprised to learn that Leipzig never cut its funding for cultural institutions even during economically fraught times. It was equally surprising to learn that unlike other cities in Saxony, Leipzig did not change its zoning and planning laws but decided to maintain the city’s structure, even though this initially resulted in high vacancy rates in the city’s building stock. In the long run, however, the decision to maintain the city center’s structure and its cultural institutions seems to pay off, as they make Leipzig the vibrant place it is today.

While Leipzig experienced a heavy decline in its population during the 1990s, the city managed to turn this trajectory around and see population numbers rise again. To build on this positive development, the city has developed an integrated urban development plan, the Leipzig 2030 strategy. What we found particularly interesting about Leipzig 2030 is how the city has designed the strategy-making process to involve citizens and civil society as well as to allow for a review and re-adjustment of the strategy in the face of pressing challenges, such as climate change.

Cycling through Leipzig’s West, we passed by „Bürgerbahnhof Plagwitz“, a former brownfield site transformed into a common space for neighbors, families, and kids. In 2009, the city bought the land and collaborated with a local foundation to develop the site. Today, the area provides a playground, café, urban forest, and serves as a space for concerts, events, and kids workshops – a prime example of how Leipzig continues to repurpose previously unused land.

For a few years, Leipzig has strongly aimed at attracting young professionals and innovative businesses. Visiting „Spinlab“, a start-up accelerator, we learned that startups not only from Germany, but also from many other countries apply to participate in the accelerator’s program, come and then stay in Leipzig.

A conversation with activists from the Unteilbar movement then allowed us to discuss the general political climate in the state of Saxony, with Leipzig being almost like a progressive island surrounded by regions that recently contributed a large number of votes to the AfD party in the recent parliamentary election.

Leipzig definitely did not take its future for granted but showcased what can be achieved by cultivating and following a long-term perspective on urban development. In doing so, Leipzig validated the argument for sticking to one’s principles – even in difficult times – on the path to creating an equitable, sustainable, and desirable city. 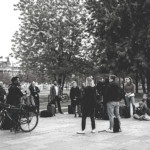 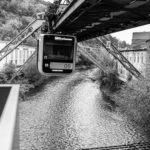