In October 2021, the New Urban Progress fellows went on a delegation trip through three German cities. In this Trip Journal, four fellows reflect on a day in which they explored Berlin’s competing visions of social housing by foot.

On Sunday, the group challenged their step counters with an extensive walking tour through the Hansaviertel in the western centre and along the Karl-Marx-Allee in the heart of former East Berlin to compare the planning paradigms of both political systems.

We began with a walking tour of Berlin’s Hansaviertel, a model housing development project from the 1950s that served as a showcase for various architectural styles and approaches to social housing that, at the time, were seen as highly innovative and even revolutionary.

The modern view on the Hansaviertel, however, reveals that both the design and the management of these living spaces fell short of the lofty initial expectations. Indeed, the Hansaviertel presents an opportunity to learn from past mistakes. What began as an exemplary development to showcase the realm of possibilities for delivering high-quality social housing has now become private housing – some of it highly desirable and thus increasingly expensive – as ownership of social housing was gradually transferred to the private rental market.

The problem of social housing being turned over to the private market is one the city is aware of and actively trying to combat. We learnt that the city of Berlin is pursuing a strategy that, in the short term, may increase the social housing stock, but which is a gamble in terms of ensuring the sustainable, long-term provision of social housing.

The city’s approach is two-fold: the municipality purchases the building and then has the option to offer it to one of the six municipal housing companies, or to sell it back to the private sector with stipulations (e.g., the building must remain in the social tenancy market for a predetermined period, after which the building can return to the private rental market). This approach has raised several questions, most notably around the sustainability of it. One can argue that the architectural prominence of the Hansaviertel has driven the loss of social housing units, so while the story may not be as dramatic elsewhere in the future, it’s a case study for protectionist policies to preserve social housing.

Another issue that was raised is the need to decarbonize the housing stock, and how this would impact rents. More generally speaking, it is clear that additional policy measures will be required to ensure that the social housing purchased now will not be lost to the private sector in the short to mid term.

After soaking in West Berlin approaches to social housing, we moved to the eastern part of the city, walking along the Karl-Marx-Allee (formerly known as the Stalinallee) to observe architectural styles and former social housing units there. The Karl-Marx-Allee is a wide, tree-lined boulevard specifically designed to showcase the might of the East German regime – it’s wide streets were ideal for military parades featuring tanks and marching troop formations.

Both the Hansaviertel and the then-Stalinallee were centrally planned following WWII and were influenced by the ideals of the planning principles of the Athens Charter, with separated functionalities and emphasis on the role of light, sun and air in urban planning. One ideal of this time was the planning of very wide roads. Both Altonaer Strasse (an arterial road through the Hansaviertel) and the Karl-Marx-Allee are multiple lanes of traffic wide, and these roads effectively serve to separate people from each other: it would be impossible to make eye contact with someone on the opposite side of the road, for example. The sheer dimension of these roads makes the pedestrian feel small and uncomfortable, and ultimately discourages active mobility.

In both the east and the west, planners ignored the human scale

Thus in both cases, despite the diverging political systems, planners (purposefully) ignored the human scale. That said, their reasons for doing so differed: the design of the Altonaer Straße was driven by the ideals of car-oriented urban planning, while the Stalinallee was built primarily to allow for impressive military parades, as previously mentioned.

Ultimately, in terms of social housing goals, both examples from the east and the west showed how the long-term execution and maintenance of these housing units has not quite lived up to the ambitions with which they were first built.

In an additional walking tour of Friedrichshain and Kreuzberg later in the day, we saw evidence that even without government intervention, communities are bound to self-organize and regulate themselves into an approach that fits their needs, constraints and interests. Specifically, we walked by an independent, off-grid housing commune in the middle of Görlitzer Park, a popular urban park in the city.

According to our walking tour guide, newly elected council woman Julie Richier, the commune is regarded as part of the larger neighborhood and respected in its autonomy. Contrary to the initial housing developments we visited, this commune is free to continue living on their own terms as long as they have the autonomy, which seems to be, perhaps, the strongest difference between all housing approaches so far.

Ultimately, the first day showed how despite their political differences, the east and west parts of the city have ultimately ended up with very similar housing challenges – challenges that the city is still working to adequately address and which citizens continue to struggle to navigate. 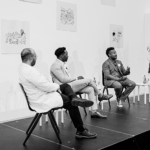 Democratizing the City20. Oktober 2021
Monday, October 18, Berlin: Transformations and the City of the Future27. Oktober 2021 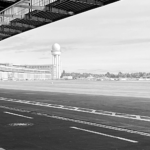