Our second New Urban Progress delegation trip will take our fellows to Chicago, Denver, and Austin

After last year’s delegation tour through Germany, our New Urban Progress fellows will now visit the United States. The three urban areas they will explore are Chicago, Denver, and Austin, where they will meet with city officials, urban planners, civic leaders, and entrepreneurs and continue to work on how cities can be more innovative, democratic, and sustainable.

Make sure to watch our interview with Deputy Mayor Ulrich Hörning during last year’s visit to Leipzig.

Stay updated on our trip by visiting our website, social media and signing up to our newsletter here.

The first stop of our New Urban Progress (NUP) delegation tour through the United States offered exciting insight into the urban planning of such a metropolis as Chicago. Not only were there numerous parallels to German urban development, but our speakers and hosts also emphasized the potential for a continued transatlantic urban cooperation.

From Chicago’s city government over institutions researching the role of cities globally to the importance of communities on the grassroots level, our fellows learned a diverse set of perspectives and experiences on how individual actors and institutions approach global issues from an urban standpoint. Their meetings with Deputy Mayor Samir Mayekar, the Chicago Council on Global Affairs, and their tour through the Chicago Lakeview neighborhood provided the fellows with different approaches and insight into the work of urban actors at various levels.

The Windy City also complemented our fellows’ experiences during their delegation tour through Germany. For example, the Northerly Island project, commissioned by the Chicago Park District, aims at transforming a former airport into a park. Equipped with a 50-acre freshwater lagoon, woodlands, and public meeting spaces, the park in progress resembles the Tempelhofer Feld, also a former airport in the heart of Berlin and visited by our fellows last year. Now one of the largest green spaces in an urban setting, the Tempelhofer Feld offers opportunities for community projects, public gardens, social gatherings, and recreational activities. Both projects emphasize the importance of democratic processes and public engagement in pursuing sustainable, democratic, and innovative urban development.

Chicago, as one of the largest metropolitan areas in the United States, offered our fellows valuable lessons on how to make a city adapt to the effects of climate change and how to make urban development equitable and beneficial for all citizens.

Find below a selection of our impressions in Chicago over the weekend and stay tuned for our next NUP visit: Denver, CO.

The second stop of our New Urban Progress (NUP) delegation tour through the United States brought our fellows to Denver, Colorado. As the Denver metropolitan area nearly doubled its population in the past 30 years, the local government had to learn how to address housing challenges and other related issues against the backdrop of climate change impacting the city’s infrastructure. Our fellows met with various actors on the governmental and civic levels who approach the challenges of rising housing prices, living expenses, and the effects of climate change from a diverse set of viewpoints.

During their meeting with Colorado Smart Cities Alliance, our fellows learned how innovation makes cities more equitable through economic development and collaborative ecosystems. On the issue of housing insecurity, various community organizations also shared insight on how they create safer outdoor spaces for people experiencing homelessness and provide short-term emergency relief in the Denver metro area. Regarding climate change, our fellows spoke with various Denver and Boulder city officials who informed our fellows about initiatives and projects both cities are taking to mitigate and adapt to the impact of climate change. Their talk with sustainability officers from Boulder offered answers on how to measure, communicate, and best address the urgency of climate policies to the public, for example, by coupling policies to economic security to make progressive energy policies more tangible to the public.

Find below a selection of our fellows’ impressions in Denver and Boulder, Colorado last week.

Our New Urban Progress fellows made their third and final stop on their US delegation tour through the United States in Austin, Texas. During their three-day stay in the Lone State capital, our fellows met with community organizations, activists, and local government officials on issues ranging from climate policies, democratic engagement, and urban development.

After visiting Tempelhofer Feld in Berlin and Northerly Island in Chicago, our delegation continued to learn about innovative ways the grounds and building of former airports can be re-invented for community spaces, affordable housing, and green areas in urban settings, by the example of the former Robert Mueller Municipal Airport site in Austin. The Mueller plan for the site’s redevelopment focuses, amongst other aspects, on ensuring diverse, affordable, and sustainable housing. Our fellows also explored Austin’s climate policies with two experts on the Austin Climate Equity Plan, which was adopted by the city council in 2021. During their meeting with Austin’s mayor Steve Adler, they had the opportunity to discuss the city’s efforts in ensuring progressive climate policies, democratic participation, and equitable urban development with the leader of the local government directly.

After nine long days filled with new impressions, practices, and inspiration, our fellows now return home to continue working on their papers centered around inclusive growth & innovation, networked governance & democracy, and sustainability & social mobility in urban development. Stay tuned for our detailed recap of the trip and our paper launch conference.

Find below a selection of our fellows’ impressions during their visit to Austin, Texas. 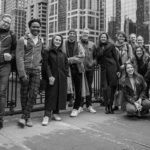