Cities as Networks: A Fireside Chat with Bruce Katz

Metropolitan areas are at the forefront of the major challenges from the 21st century. The New Urban Progress fellows discussed the opportunities that cities offer with Bruce Katz, a leading expert on urban policy and city networks. The fireside chat dove deep into how the stimulus funds from the Biden administration may help bolster cities, including innovative solutions for delivering racial equity.

How has the American Rescue Plan, the trillion-dollar federal stimulus package in response to the Covid-19 pandemic, assisted economic recovery in cities across the United States? This question grounded the discussion between the New Urban Progress fellows and Bruce Katz. The discussion then zoomed in on how the stimulus package could directly address issues of social justice and inclusive growth.

The New Urban Progress fellows used this discussion to further and expand some of the main ideas they were working on in their groups. You can find their scene-setting and groundwork-laying articles here:

Bruce Katz was a vice president at Brookings and founding Director of the Brookings Metropolitan Policy Program before he became the inaugural Centennial Scholar at the think tank. Previously, he has served as chief of staff for the Housing and Urban Development Secretary and as staff director at the US Senate Subcommittee on Housing and Urban Affairs. He later advised the incoming Obama administration on housing and urban policy.

Today, Bruce Katz is an advisor at The New Localism, a start-up he co-founded, and a visiting professor at the London School of Economics. With New Urban Progress, he is a member of the Sounding Board. 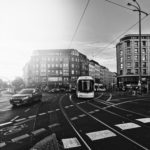